Athens in the Ottoman Period 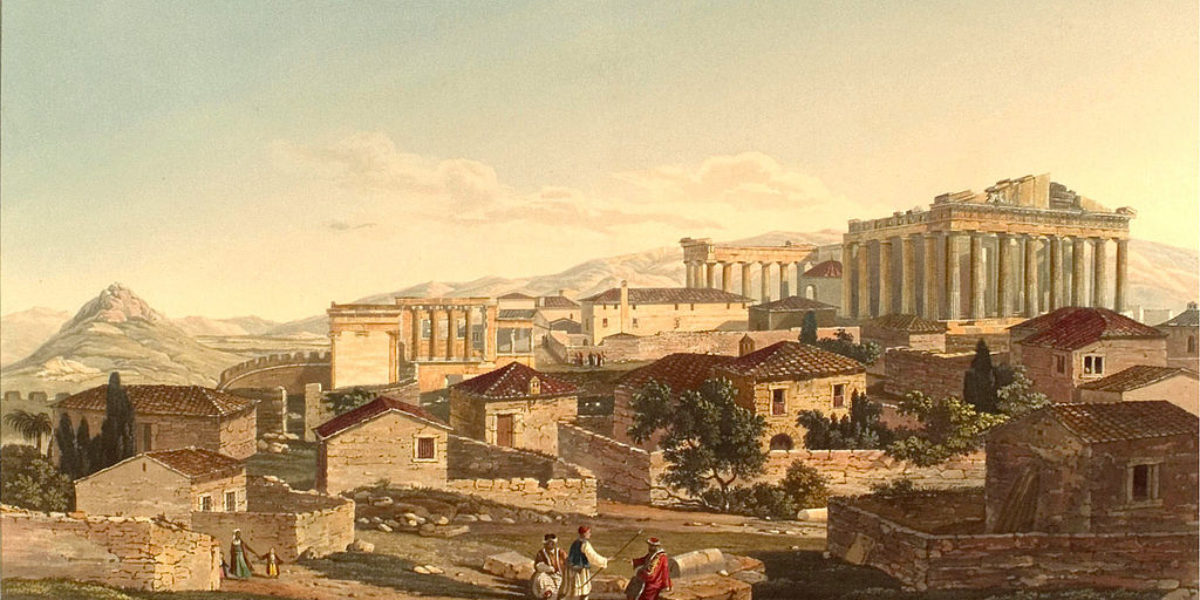 The Ottoman period for Athens began in 1458 with the city’s peaceful occupation, following a treaty between the Ottomans and the last duke of the Acciaioli, and ended in 1821 with the proclamation of Greek Independence. During this period the city was in Ottoman hands continuously with the exception of a brief interval of Venetian occupation between 1687 and 1688, which is usually taken as the boundary between the historical subdivisions of the first and second Ottoman periods.

In the first years following the conquest, the Ottoman presence was limited to the area of the Acropolis, and the city seems not to have expanded beyond the boundaries of the late Roman walls. Soon, however, with the arrival of new Christian inhabitants and, later, the increase in the Muslim population as well, the city expanded and was gradually reorganized, as it enjoyed administrative and religious privileges bestowed upon it by Mehmet the Conqueror himself. This course of development was interrupted in 1687 by the Venetian attack led by Captain-General Morosini, whose siege and bombardment of the Acropolis brought the greatest destruction to its monuments in history. The Venetians left Athens after five months, and the Ottomans, as well as the Greek inhabitants who had in the meantime taken refuge in neighboring regions, returned in 1690. The subsequent period was characterized by social and economic realignment, while from 1790 the city’s incorporation into the administrative system known as malikâne led to a drastic deterioration in the living conditions of the inhabitants, reaching its nadir with the twenty-year despotic rule of the voyvoda Hacı Ali Haseki (1775-1795).

Throughout the period, the organization of the urban fabric seems to have followed the basic distinction between areas of the citadel (kastro) and of the lower city. This distinction also extended to the corresponding economic and social functions of the two areas. The relevant sources for the first two centuries are limited, but after the third quarter of the 17th century, valuable information is to be found in the descriptions of foreign travelers who visited the city ever more frequently and described its topography and sketched its monuments.

The Acropolis, or “kastro,” was the exclusive residential compound of the Muslim population and the Ottoman garrison. Among the first projects of the Ottomans was the conversion of the Christian church in the Parthenon into a mosque and the repairs to the fortifications, which were more systematically strengthened in the 17th century with the construction of the Wall of the Ypapanti. The lower city, densely built with habitations and public buildings, was divided up into open spaces and parishes/neighborhoods, and concentrated economic, administrative and religious functions. Commercial activities — focused in the daily (lower bazaar) and weekly (upper bazaar) market — flourished in the area of the Library of Hadrian and the Roman Agora, where the administrative center and voyvoda’s residence were still located.

This picture of the public spaces of Ottoman Athens is filled in with baths, mosques, tekkes and educational establishments, as well as a large number of churches, both old and new. As for works of fortification, in 1778 the only such project was the Haseki wall, an almost makeshift construction, built from materials plundered from ancient monuments.

After the outbreak of the War of Independence, the Greeks managed to take control of Athens for four years (1822-1826), during the course of which attempts were made to reorganize public life and maintain the city’s monuments. However, in 1827, the forces of Kütahi recaptured the city, which was once again abandoned by its inhabitants. The city’s final emancipation, with the surrender of the Acropolis to the new Bavarian rulers, took place on the 31st of March 1833, and Athens’ proclamation as the capital of the independent Greek State soon followed.