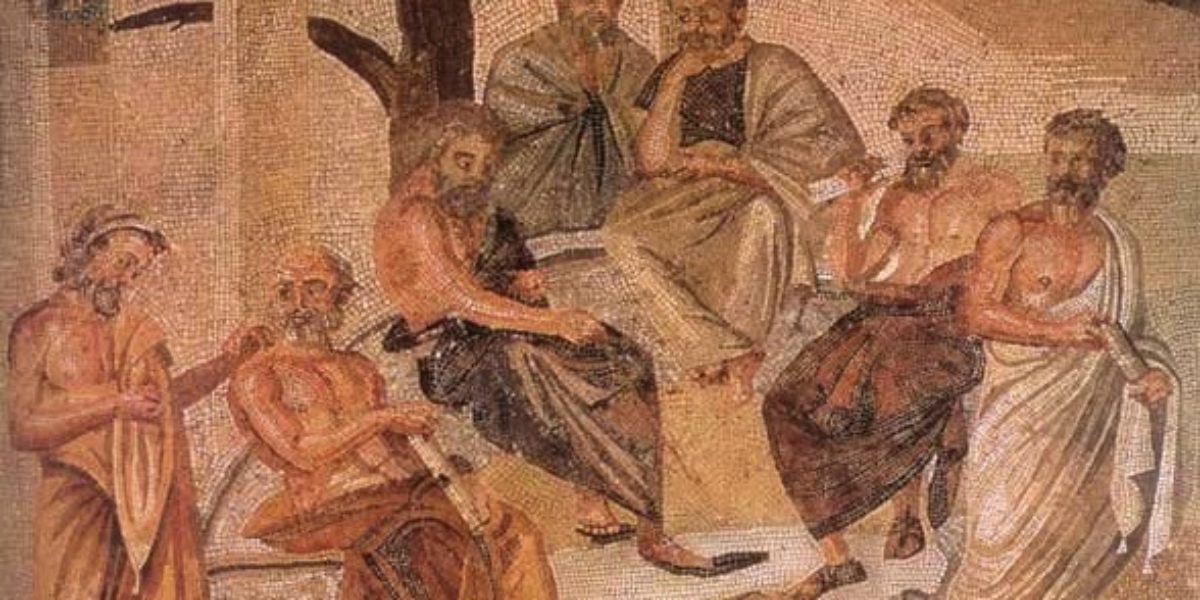 Plato (c. 427-347 BC) was Socrates’ student and one of the most influential philosophers in Western civilization. Born to a politically active and wealthy noble Athenian family, (Plato’s mother was descended from Solon, the famous lawgiver credited with major democratic reforms that paved the way for Athen’s Golden Age) Plato grew up during the Peloponnesian War (431-404 BC), a conflict that arose among Athens, Sparta, and their allies. This civil war was the beginning of the end of the Athenian Golden Age, and created an opening for later conquest by Philip of Macedon. The principles of democracy in Athens were lost, as was much of the cultural wealth of both city states.

During this general shift away from democracy, Plato was a young man, and probably served in the military around 409-404 BC. The Rule of the Thirty, a period of tyrannical government, replaced the last vestiges of democracy before Plato reached adulthood. Though Sparta emerged victorious in battle, the balance of power between the two city states remained uncertain, with neither state gaining a clear economic or political advantage.

His relatives Critias and Charmides introduced Plato to Socrates and his radical and vibrant philosophical group. Socrates became Plato’s teacher from 469-399 BC. Plato was deeply influenced by Socrates’ emphasis on ethics and politics, and would later commemorate Socrates as the wise and central speaker in his philosophical writings. When Athens lost the Peloponnesian War, Critias and Charmides, the same relatives who had established Plato in Athens, became part of the despotic Rule of Thirty, also known as the Thirty Tyrants.

When the government of the Rule of Thirty crumbled in 403 BC, Critias and Charmides were executed. Socrates was then put to death in 399 BC, not by the Rule of Thirty, but by the newly reinstated and corrupt Athenian democratic system. Plato gave up all political aspirations after this tragedy, and pursued instead a career of travel and philosophy.

He travelled to the Greek city of Syracuse in Sicily around 387 BC, ruled by the despotic Dionysius, where he tutored and befriended Dion, a relative of the king. During his journeying in Italy Plato encountered followers of Pythagoras, an early philosopher whose views on the soul and the afterlife seem to have greatly influenced Plato. Plato would also have been intrigued by tales of a Pythagorean class of philosopher-elites who had ruled over some of the Greek cities in Italy, an idea that would resurface in his Republic . Plato’s visit to Syracuse, however, ended abruptly – one legend suggests that Dionysius was annoyed by Plato’s critical comments and tried to sell him as a slave – and Plato came back to Athens in 386 BC to found his school in a place dedicated to Academus, a mythical hero. The Academy is among the first organized institutions of higher education in the Western world.

He remained at the Academy for the next twenty years until drawn away from his work there in 367 BC by a request from Dion, his old friend from Syracuse, to return to Sicily. Plato probably made the voyage with the expectation that he could be instrumental in forming a new state in Syracuse, one dedicated to philosophical ideals. In 361 BC, however, he returned to Athens, feeling that Sicily’s problems were too great for one man to overcome. His return to Athens was marked by the arrival of a brilliant student to the Academy named Aristotle, whom Plato taught for the next twenty years until his death in 347 BC, according to legend, with his pen still in his hand.

Plato composed over twenty dialogues, (the dialogue itself was then a revolutionary prose form) as well as a series of philosophical letters. Although most of the letters are thought to be forged, the “Seventh Letter” contains information about Plato’s life that most scholars believe to be accurate. Almost all of Plato’s works were lost in the West during the Middle Ages, except for the first third of the Timaeus. His writings were not recovered until the fourteenth and fifteenth centuries, when Italian humanists gradually rediscovered and translated his works into Latin. From this point forward, Plato’s texts, and his magnum opus The Republic , in particular, have had an impact on European history second only to the works of Aristotle.

Particularly influential was his theory of Forms, in which Plato suggested that the reality of corporeal and materials things is based on a metaphysical reality of ideas that exists in an eternal world of Forms. Plato’s idea of a an absolute Form of the Good was close to the Christian monotheistic God; Neoplatonism in the Christianizing Roman Empire (100-400 AD) revived Plato as an early precursor of Christian doctrine.