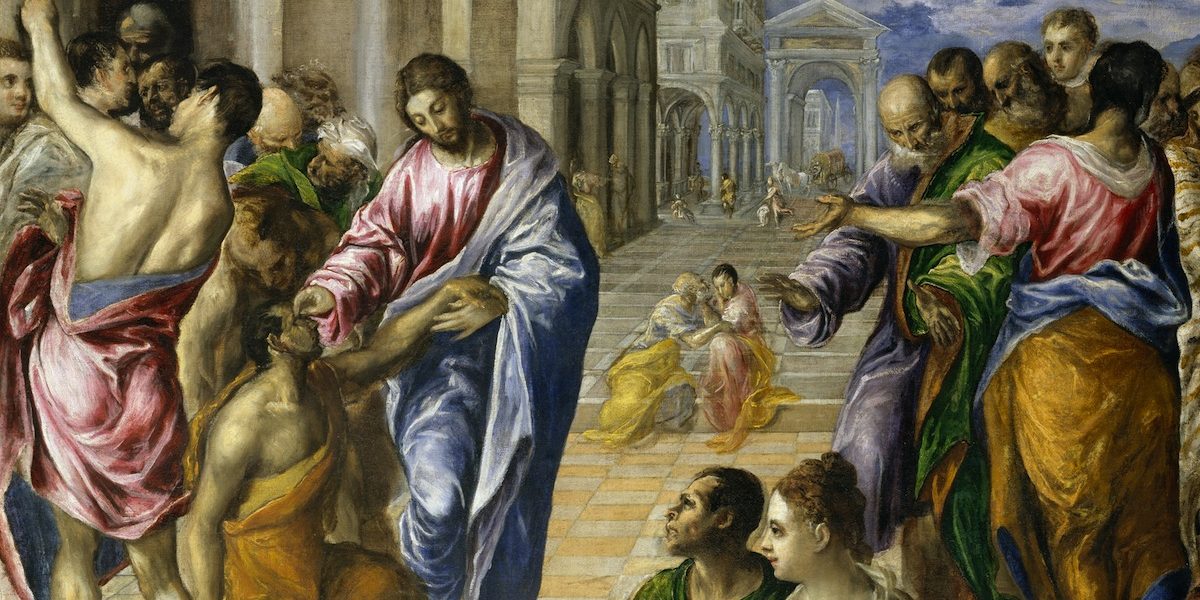 El Greco – Domenikos Theotokopoulos – (1541-1614) is one of the few old master painters who enjoys widespread popularity. Like Vermeer, Piero della Francesca, and Botticelli, he was rescued from obscurity by an avid group of nineteenth-century collectors, critics, and artists and became one of the select members of the modern pantheon of great painters. For Picasso, as for so many later admirers, El Greco was both the quintessential Spaniard and a proto-modern—a painter of the spirit. It was as a painter who “felt the mystical inner construction” of life that El Greco was admired by Franz Marc and the members of the Blue Rider school: someone whose art stood as a rejection of the materialist culture of modern life.

Born in Crete, El Greco was trained as an icon painter. Two certain examples survive, and these remind us of the Neo-Platonic, non-naturalistic basis of El Greco’s art, before he set about transforming himself into a disciple of Titian and an avid student of Tintoretto, Veronese, and Jacopo Bassano. He moved to Venice in 1567 (Crete was a Venetian territory). There he set about mastering the elements of Renaissance painting, including perspective, figural construction, and the ability to stage elaborate narratives. Among his finest works of this period is The Miracle of Christ Healing the Blind (1978.416). Later, in Spain, El Greco wrote treatises on painting. Although these are lost, we possess the copies he owned of the architectural treatise by the ancient writer Vitruvius and Vasari’s Lives. They have El Greco’s annotations in the margins.

From Venice, El Greco moved to Rome, where he worked from 1570 to 1576. He arrived with a letter of recommendation from the Croatian miniaturist Giulio Clovio, who secured him quarters in the palace of Cardinal Alessandro Farnese—perhaps the most influential and wealthy patron in all of Rome. In 1572, he joined the painter’s academy and he set up shop, taking on at least one assistant, and possibly two. His intention must have been to pursue a Roman career, but after six years he had not received a single commission for an altarpiece; his reputation was based on occasional commissions for portraits and small-scale devotional paintings. El Greco had ill-advisedly criticized Michelangelo’s abilities as a painter, an opinion that generated little confidence in his abilities and may have served to ostracize him from the Roman art establishment (Michelangelo had died in 1564, but his prestige in Rome was undiminished).

These were not auspicious beginnings for his career in Spain, where he moved in 1576. In Madrid, his bid for royal patronage from Philip II failed. Not until he settled in Toledo did El Greco meet with the success an artist of his caliber might have expected. In this ancient city, which El Greco immortalized in one of the most celebrated landscapes in Western art—the View of Toledo (29.100.6)—he found a sympathetic circle of intellectual friends and patrons and forged a highly profitable career. Diego de Castilla, dean of Toledo Cathedral, commissioned El Greco to paint three altarpieces for the Church of Santo Domingo el Antiguo in Toledo and was also instrumental in the commission of the Espolio (The Disrobing of Christ) for the cathedral vestiary. These are among El Greco’s most ambitious masterpieces. In them can be found all of the various styles with which he had experimented in Italy: the naturalism that characterized his portraits; the painterly technique he had learned in Venice; the audacious compositional ideas of the late Michelangelo; and a Mannerist emphasis on hyper-elegance and refinement. A dispute over the price El Greco demanded for the Espolio led to litigation and left a mark on the artist’s subsequent career: he never received another comparable commission from the cathedral authorities; in the future, his commissions were to come from private individuals and convents in the city.

El Greco’s most celebrated painting, The Burial of Count Orgaz, was commissioned by the parish priest of Santo Tomé in Toledo in 1586 to celebrate the restitution of a financial obligation to the church. It honors a long-dead benefactor, at whose funeral Saints Stephen and Augustine were seen to miraculously appear to assist in the burial. The picture depicts this miracle as well as the count’s soul being received into Paradise. When seen in the church, the painting has the arresting character of a vision. El Greco’s son Jorge kneels fictively on the edge of the picture plane, looking out and indicating to the viewer the miracle El Greco has conjured up. The figure thus serves as intermediary between the real world of the viewer and the fictional world of the painting, which gains added resonance through the inclusion of a series of portraits of El Greco’s contemporaries. (El Greco was a remarkable portraitist [29.100.5], able not only to record a sitter’s features but to convey his character.) Above the funeral is depicted a heavenly vision, where a very different visionary experience is depicted: the verisimilitude of the earthly event is rejected in favor of a world of shifting planes inhabited by chimera-like personages. The Burial of Count Orgaz is central to our understanding of El Greco because it encapsulates the object of his art, which is to suggest a visionary experience—something that is not an extension of our physical world but of our imaginative faculties.

Toledo was far removed from the artistic ferment of Rome, but it was no bastion against the forces—cultural as well as artistic—that were to shape the art of the seventeenth century. It is all too easy to treat El Greco’s achievement in isolation, as though it were an art outside of its time—an art waiting to be discovered by the modern era. Yet when El Greco died in 1614, Caravaggio and Annibale Carracci—the creators of the new Baroque style—had been buried for four and five years, respectively. It is enough to mention these figures to realize that in important respects El Greco’s art belonged to the past, not the future: to the world of Mannerism, with its emphasis on the artist’s imagination rather than the reproduction of nature.

Francisco Pacheco—painter, artist’s biographer, and teacher of Velázquez—visited El Greco in his studio in Toledo and recorded seeing plaster, wax, and clay figures from which he worked. Pacheco did not approve of this method, which El Greco had doubtless learned from Tintoretto in Venice: a real human figure rather than something modeled in clay was what Pacheco advocated. But he could not deny El Greco’s place among the great painters, “for we see some works by his hand so plastic and so alive (in his characteristic style) that they equal the art of the very best.” He may have had in mind El Greco’s portraits, which Velázquez prized highly. Yet it is the most extravagant late works of the artist, such as The Opening of the Fifth Seal (56.48), in which the figures are elongated beyond credibility and their forms dematerialized by a flickering brushwork, that have appealed so strongly to modern tastes.

El Greco rejected naturalism as a vehicle for his art just as he rejected the idea of an art easily accessible to a large public. What he embraced was the world of a self-consciously, erudite style, or maniera. The paradox is that, at a time when the blatant display of artifice inherent in Mannerism was being criticized as an indulgence, and artists in Rome were striving to rid their paintings of anything that might seem mere display, El Greco took just the opposite route. He made elongated, twisting forms, radical foreshortening, and unreal colors the very basis of his art. The difference was that he made these effects deeply expressive and not merely emblems of virtuosity.

No other great Western artist moved mentally—as El Greco did—from the flat symbolic world of Byzantine icons to the world-embracing, humanistic vision of Renaissance painting, and then on to a predominantly conceptual kind of art. Those worlds had one thing in common: a respect for Neo-Platonic theory about art embodying a higher realm of the spirit. El Greco’s modernism is based on his repudiation of the world of mere appearances in favor of the realm of the intellect and the spirit.