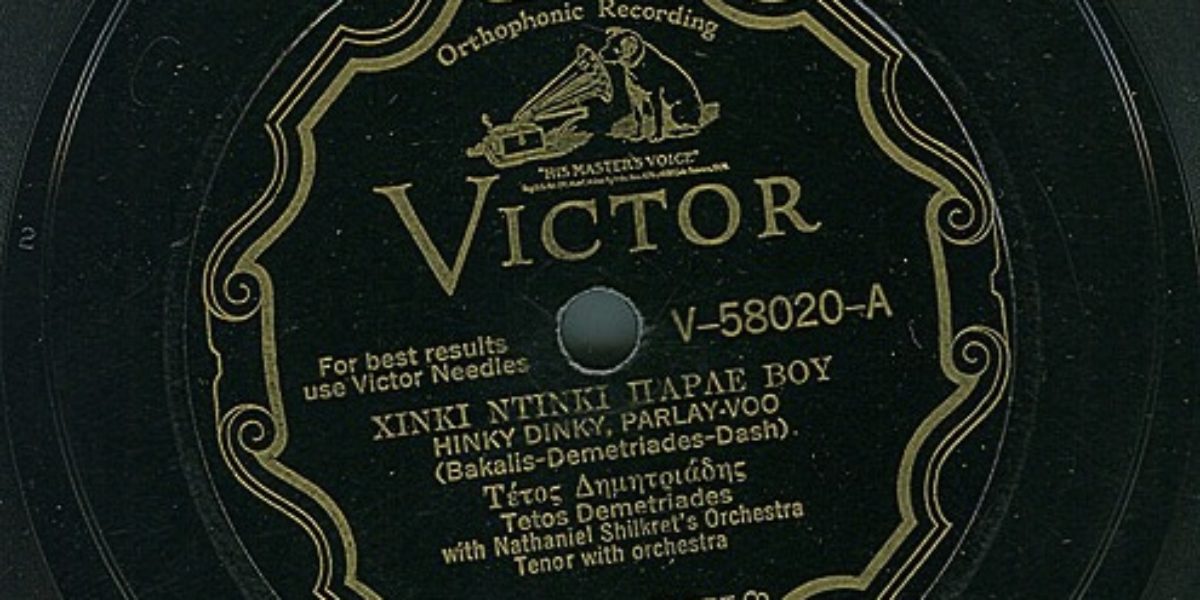 Perhaps not too surprisingly, then, we find that a great deal has been published about this man in Greece and across the Internet. Unfortunately, much of this material contradicts itself. Having said that, a wealth of reliable documents exists on this man and his long career. For those of you who are unconcerned with history but who love Greek music nonetheless, you can stop reading this account and directly contact the University of Utah concerning listening copies of this man’s personal musical legacy. In the 1990s, a collection of re-recordings of all Demetriades’ known records, as a performer, were deposited by noted record collectors Dino X. Pappas and Andrew Dellas at the Marriott Library at the University of Utah. For those of you who would like to know more of this man’s contributions to world music, I offer this sketch.

A Greek immigrant from Constantinople, Demetriades began recording for the Victor Talking Machine Company in 1927. Credited with over 250 known individual recordings the difficulty in providing an exact number for Demetriades records is his use of pseudonyms. Given his acute awareness of niche marketing, Demetriades recorded under specific personas such as Takis Nicolau, Nontas Sgouras and others when performing particular songs or genres. Demetriades was also known for his cover songs of popular American songs of the day. Well aware of this issue, Pappas and Dellas included many of these other Demetriades recordings in their overall deposit.

Demetriades proved so successful at choosing top-selling song titles, musicians, dance instrumentals, and genres for the wide array of Greek musical traditions he soon held an executive position in Victor Talking Machine Company’s foreign language division. Be aware that at that particular moment in time the Victor Talking Machine Company was the world’s largest manufacturer of phonographs. Demetriades’ ability to select bestselling music for over 20 different ethnic groups soon made him the envy of many an aspiring ethnic-musician or would be foreign-born record promoter.

Demetriades is especially noteworthy in the history of Modern Greek music for his recording trip to Greece in the 1930s. In 1929, Radio Corporation of America (RCA) purchased the Victor Talking Machine Company. Such was Demetriades’ standing with that company, at the very onset of the Great Depression; he was supported in his project. Sometime between March 1930 to late December 1931; Demetriades engaged in a singular field collection project. Ship records report Demetriades and his wife Mary returned from Patras to New York City on November 4, 1931.

Demetriades was forced to make this trip given the recording restrictions then imposed by political authorities across the eastern Mediterranean. Government restrictions in Greece, Turkey, the Balkans and across the Middle East down into North Africa in general prohibited the performance, let alone recording, of specific types of music and musicians. One of the cultural side effects of the political breakup of the Ottoman Empire was that the newly formed countries (including Turkey) would not allow any “foreign music” to be recorded within their recently drawn borders. The obvious problem with this was that the Ottoman Empire had always been a polyglot, multi-cultural and religiously diverse entity.

Demetriades recorded music by Greek, Turkish, Albanian, Armenian, Gypsy, Ladino (a romance language), and other musicians. Many came to Athens where he was recording from Constantinople, Smyrna and Asia Minor in general. Consequently Demetriades returned with a wide selection of some 200 individual recordings of these prohibited genres, instrumentals and musicians. Upon his return Demetriades established an arrangement with RCA Victor to issue these Greek, Turkish, Ladino and other recordings exclusively on the RCA-Victor’s Orthophonic label.

Without going into too much technical detail here RCA-Victor’s Orthophonic label featured the new electric recording through the new technical medium of microphones. This was a technical advantage the Victor Talking Machine Company had made on the cusp of 1925-1926 when they first announced this label as part of their overall catalog. At every stage in his career Demetriades sought to give his listening audience the very best in overall sound and product. Aptly enough as the Victor advertisements always noted the word ‘orthos’ originally comes from the Greek word meaning, ‘correct.’ The claim was there was a better or more accurate overall sound to this kind of newly manufactured record.

Technical issues aside this strictly commercial endeavor preserved musicians, musical traditions and performance styles as well as language-mixture never – after the breakup of the Ottoman Empire – allowed in Greece and the Eastern Mediterranean to be performed in public let alone commercially recorded. After Demetriades’ field collection trip he returned to his dual role as music producer and recording artist.

This same time period is also said to be when Demetriades produced and shot two Greek language films in New York City, I Grothia de Sakati (1930) and Afti Eine I Zoi (1931). Both films are lost and documentation on these two films is very slim, at best. As advertising attests Demetriades continued after 1934 to own and operate a fully-appointed record store in New York City. Whether he also co-owned a store in Athens with other members of his family is a question for future research. Given the number of references to Demetriades as a “band leader.” he must have performed in such a capacity. Around this same time Demetriades also recorded Greek language comedy records.

Given that Demetriades crossed back and forth over so many musical traditions it is not unexpected that those interested in the history of American popular music know about yet another aspect of his recorded music. On many of Demetriades’ recordings, especially those related to cover songs, we find that Nathaniel Shilkret and the Victory Orchestra accompanying him. Shilkret (1889-1982) was an American composer, conductor, clarinetist, pianist, business executive, and music director. In 1926 he became ‘director of light music’ for Victor. He made thousands of recordings, possibly more than anyone in recording history… He was the conductor of choice for many of Victor’s innovative recordings. He conducted Victor’s first record made by the electrical process, the first commercial Victor Long Playing record (in 1931) and was the first conductor to successfully dub an electrically recorded orchestra background over the recordings of Enrico Caruso, Victor’s star artist, who died in 1921, before electrical recording was developed. The premiere recording of George Gershwin’s symphonic poem An American in Paris, in 1929, was one of five conducted by Shilkret that eventually earned Grammy Awards.

Even a passing read over Demetriades’ career never fails to impress the reader with how many different aspects of the music industry this one man was not only an accomplished authority but a true visionary. As a case in point I need only mention Demetriades’ article ‘The Importance of International Music to Music Machines.’ This point needs to be raised given the relationship and legends about Demetriades involvement with the top-selling version of Beer Barrel Polka. Without question Will Glahe, a German born accordionist and composer, achieved the pinnacle of chart success in 1939 through his own re-arrangement of ‘Polka of Modrany.’ Demetriades is credited, with first, changing the name of this song to Beer Barrel Polka. Next, Demetriades violated all marketing rules for records and insisted that initially this song only be made available on jukeboxes. As the popularity of the song grew so did its potential market consequently when finally released to the general public it became an overnight best seller.

In 1945, Demetriades left RCA-Victor to establish his own independent record company Standard Phono Company with its Colonial and Standard labels. In time this company would feature titles in over twenty languages including but not limited to Greek, Turkish, Albanian, Arab-Syrian, French, Irish, Lithuanian, Norwegian, Polish, Slovenian, Swedish and others.

A Billboard review of Demetriades ran in April 1950: “Disk sales and merchandising in the foreign field, he points out, varies considerably from accepted record business traditions. For instance, a good disk often starts slow, with perhaps a sale of 1,000 the first year. The second year it may sell another 2,000—and continue to build for years—finally becoming a solid catalog item. The philosophy of a rapid sale and quick death, so common in the pop field, is completely divorced from the foreign field.” In early days of June 1950, Demetriades moved Standard Phono offices and record plant from New York City to his New Brunswick, New Jersey farm. On July 1, 1967, Recordwagon, Incorporated purchased the Colonial Standard label. At the time of this sale Demetriades’ company featured 155 titles in 21 languages.

Tetos Demetriades died on November 28, 1971. As even this all too brief account demonstrates Tetos Demetriades as musical artist, record producer, film maker and field collector of rare music traditions was an impresario whose full career and overall ramifications mandates extensive study.

Steve Frangos for the HFC.