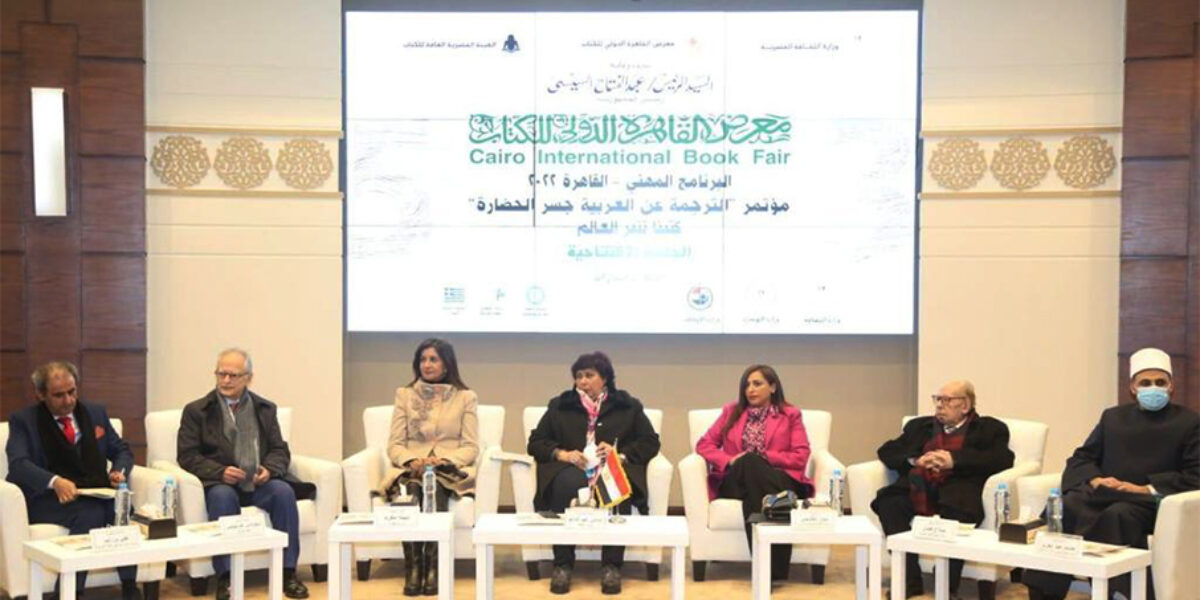 The event on the importance of translating Arabic literature into other languages took place at the Al Manara International Conference Center on 26/1/2022, as part of the 53rd Cairo International Book Fair.

Among others, the Greek Ambassador Mr. Nikos Garilidis, the Minister of Culture Mrs. InasAbd Eldayem, the Minister of Diaspora Mrs. Nabila Makram, the leading literary critic, from the greatest living Director of the Academy of Arabic Language as well as Mr. Sarah F. President of the Hellenic Foundation for CulturalMr. Nikos Koukis with an excellent and rich speech.

It should be noted that from the Greek delegation are present here in Cairo Mrs. Fani Chatziathanasiadou and Mr. Haris Meletiadis, both members of the Board of Directors of EIP.

An important axis in the meetings between publishers and cultural institutions is to be aware of the problems that exist for the publication of Arabic books.

The slogan of the conference is: “Our books enlighten the world”.

The great cretic and the director of the Arabic Language Academy Dr. Salah Fadl, among other things, pointed out the role of Greeks and Arabs in the revival of ancient Greek culture and vice versa, making a historical review, emphasizing the importance of translation.

Mr. Garilidis spoke about the historically good relations between Greece and Egypt and referred to the Minister of Diaspora who said that she met Greek Egyptians in Melbourne, Australia and was very happy that Arabic was still spoken, commenting that this happens is not only there but in America, South Africa, Sydney…

It is worth noting that his speech was in Arabic (he is from Egypt).

Mr. Koukis in his substantive speech, among other things, said: “I find that Arabic is a poetic language and the Arab world is proud of it.

The Greek language with a long history has been at the same time a bridge of culture to the peoples and nations for many years.

In order for us all to understand the importance of translation, the role of translators when Greek authors were called to translate.Let us consider how difficult it is to translate a text by Aristotle.This presupposes something very important, not just a knowledge machine but at the same time an essential understanding of the culture you are trying to translate.

The HFC is particularly interested in the translation of contemporary Greek writers into Arabic.

The Arab world has been related to the Greek world for thousands of years.

“The stand we have as a guest of honor at the 53rd Cairo International Book Fair is simple but technologically sound, as it is the new reality that leads us to the future”.