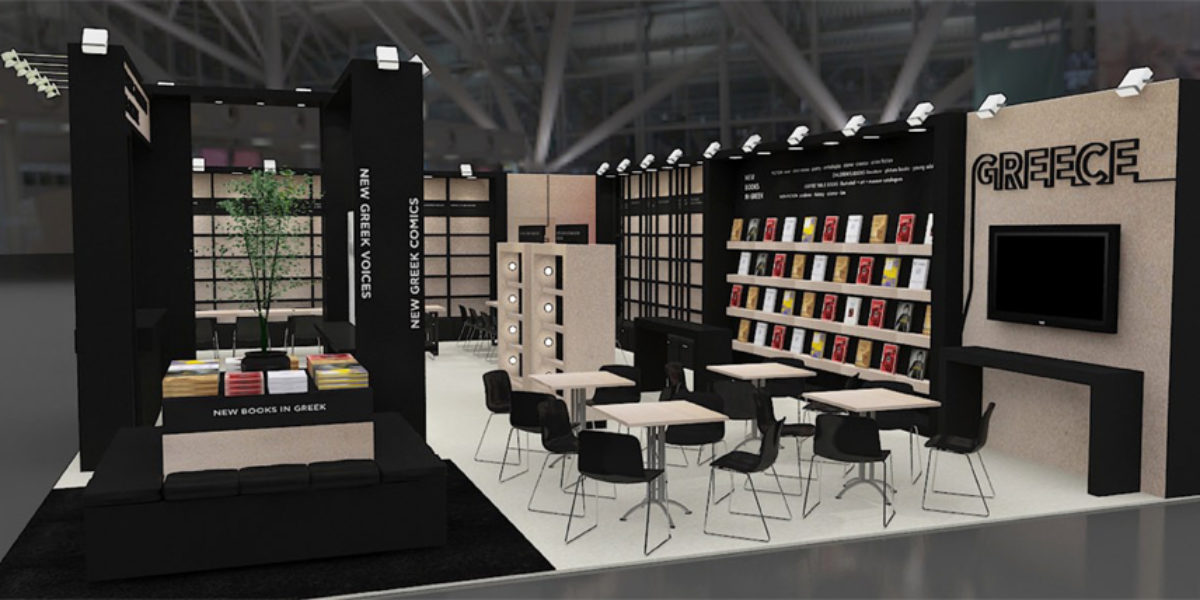 A few moments from the Greek stand at FBF2015:

What is new and exciting in Greece today? This question keeps coming up in public debates and attracts the attention of the international book market, and it is also the starting point for the Greek presence, organized by the Hellenic Foundation for Culture, at the 67th Frankfurt Book Fair, taking place 14-18 October, 2015, with Indonesia as the Guest of Honor.

Through this event, Hellenic Foundation for Culture (HFC) aims to highlight contemporary authors, who write the Greece of today – the experience of a difficult social reality brought on by the country’s economic crisis. The work of twenty (20) new talented writers from the 2nd Festival of Young Writers and thirty-three (33) young comics creators, who participated in the exhibition En Aithria 6 of Comicdom Press, is presented in the Greek Stand to engage visitors in dialogue on the international stage at Frankfurt.

The dynamic engagement of New Greek Voices is complemented by the latest in classic categories that continue to attract interest from international book professionals: National Book Awards 2014 (in cooperation with the Directorate of Implementation of Cultural Policy in the Ministry of Culture) Greek books in translation from the past two years, recent Greek editions (literature, poetry, essays, children’s books, young adult literature, coffee table and illustrated books), foreign language editions from Hellenic Foundation for Culture, museum catalogues etc., presented under the title Narratives of Greece.

Bilingual online catalog of Greek Book Publishers
The electronic catalog Greek Book Publishers (greekbookpublishing.org) was put together by Hellenic Foundation for Culture (HFC) based on the lists gathered by the International Book Fair of Thessaloniki, which every year hosts a wide range of book professionals working in all sectors of the domestic book market. The catalog is bilingual (Greek-English) and provides a useful tool for professionals and readers, enabling searches by book category.

Further, we present a brief survey entitled “The Greek publishers in times of crisis and capital controls: issues, trends and prospects,” prepared by the Association of Book Publishers S.EK.V., under the auspices and with the support of Hellenic Foundation for Culture (HFC).
This survey is a first impression of the current state of the book publishing sector in Greece, as it has developed over the last two years (abolition of the Law 2557/1997 on fixed book prices, the VAT increase from 6.5% to 23 % on production, capital controls, etc.). In a fluid economic, institutional and political environment Greeks publishers are trying to tackle the consequences of the crisis, to find solid footing and new development strategies. The purpose of the study is to highlight issues related inter alia with the transition of the industry to the digital age. Finally, this research aims to become the beginning of a fruitful dialogue, which will contribute to the normalization of the existing situation and the diffusion of the Greek book in the domestic and international environment.

This study (quantitative using a structured questionnaire) is divided into two main parts: a) Economic environment, publishing production and market and b) Editorial policy and new development strategies. (research editor: Panagiotis Kapos – member S.EK.V. / Ph.D candidate in Communication, Media and Culture). The survey results will be published shortly before the start of FBF.

A specially designed event space will host three literary events organized by the Hellenic Foundation for Culture in cooperation with the participating Greek publishers and literary agents.

The book and the writer, winner of the 2013 EU Prize for Literature, will be introduced by his Greek publisher, Nikos Psichogios, and then presented by his German translator, Michaela Prinzinger and German publisher, Jan Hübel .

The award-winning novel, which has already been sold to eight countries, speaks of time, decay, memory, love and infidelity. It teeters between the present and the past and has as its backdrop the sunny, harsh landscape of the Lesser Cyclades in the Aegean.
Language: English / German / Greek
Organiser: Psichogios Publications / Diablog.eu / GriechenlandZeitung / HFC

With the support of the Cultural Section of the Embassy of Cyprus in Germany.

Friday 16/10/2015
14:30-15:30, PRESENTATION
Letters from Greece – Project
The Letters from Greece series goes far beyond what’s served up in the press to offer an intimate, compelling insight into what it’s really like to be living and working in Greece now.

Featuring a dazzling line-up of top writers and photographers, each of the ten essays in the series focuses on different themes, from Athenian artists’ responses to the crisis to the quirks of rural life in northern Greece.

What’s new in Greece? Discover the freshest voices, the talented writers and comic artists portraying the reality of Greece today:

-Literary Agent, Evangelia Avloniti, talks to Akis Papantonis and George Pavlopoulos, two of Greece’s most talented young authors to have emerged from the Young Authors Festival at the Thessaloniki Book Fair (May 2015).

-Literary Agent, Katerina Frangou talks about the up-and-coming artists of the Greek comics scene on the occasion of the forthcoming comics exhibition “En Aithria 6” which will be held at the Greek collective stand (in collaboration with Comicdom Press).

-The presentation will be opened by the President of the Hellenic Foundation for Culture, Prof. Christodoulos Yiallourides.
Language: English / German / Greek

Established, young and emerging Greek creators of comics, representing a wide range of styles and genres, present their work in the Greek Stand with an exhibition that focuses on the creativity of the Greek comics scene, a reflection on and reflection of Greece in 2015.

The anthology Futures: poetry of the Greek crisis

Shortly before being officially released in London bookshops, the anthology Futures: poetry of the Greek crisis will be presented in the Greek Stand by the journalist Vangelis Hatzivassiliou (correspondent for Athens News Agency – ANA) in connection with the Greek Party. This is a highly relevant and timely publishing project, edited by the translator Theodoros Chiotis, who listens to a radical, new generation of poets sparked by the Greek crisis.

The anthology is edited and translated by Theodoros Chiotis and will be released on November 5 by the English publishing house Penned in the Margins.

The Greek Party
The well-established Greek reception, organized by HFC under the aegis of the Greek Consulate in Frankfurt and with the support of the Greek Tourist Organisation in Frankfurt, will take place Friday from 17:00-18:30, in the context of furthering and strengthening contact and networking with the international community of publishing professionals.

The guests will be offered Greek food and wine (sponsor: Tsantali), ouzo and mastic liqueur (sponsor: Eva-Greek destillation company) as well as souvenirs, collectible packaging “Farmer olive oil” with Greek oil from the brand GoGreek- Collectibles and assemble yourself Meet the Greeks paper kits, depicting among others the 12 Olympian gods, from the company Hartovasileion- Paper Kingdom.

Visits by Greek students from local schools
The Greek Stand will this year host visits on the weekend of Greek pupils from the two European schools of the wider area of ​​Frankfurt, at the invitation of Hellenic Foundation for Culture (HFC). The students, aged 7-14, will be given a tour of the stand, will learn about the new books presented and will receive a special message about love of reading, prepared by Eleni Dikaiou and illustrated by Leda Varvarousi –the two Greek candidates for the International Hans Christian Andersen Prize 2016 . (The message was prepared as part of the 2nd Children’s Book Festival, 5-9 October 2015). In addition, the children will talk via skype with the two authors about books and the pleasure of reading.

The Greek Stand – Participants
The welcoming space of the Greek Stand , designed by the artist Xara Marantidou, is divided into three sections: book display, event space and a meeting space both for professionals and the large public expected during the weekend.

The Greek Stand, 108 square meters, is changing neighborhood this year, after the organisers of the Frankfurt Book Fair redesigned the “geographical” distribution of exhibitors in the buildings. Thus, Greece is grouped with the French and French-speaking publishers (Hall 5.1, Stand E 131).

The Greek Stand is strengthening its cultural presence through events, exhibitions and fresh contributions from contemporary creators, while at the same time maintaining its strong professional profile established by the constant and dynamic presence of the Greek publishers. This year the following fourteen (14) Greek publishers will participate in a specially designed area of the Greek Stand: Agra, Aiora, ALDE, Hestia, Kazantzakis, Kastaniotis, Kedros, Melissa, Metaichmio, Nefeli, Opera, Patakis, The Divine Light, Psichogios, and two (2) literary agencies: Ersilia Literary Agency and Iris Literary Agency, as well as the Association of Publishers (SEKB).

In addition we are presenting the poster and informational brochures for the next and 13th Thessaloniki International Book Fair, which will take place 12-15 May 2016.

A separate space is set aside for the publications of the Greek Tourist Organisation and the screening of the GTO video “Greek Tourism – An Eternal Journey”, a visual feast of Greece’s beauty, with historical and literary references that has already won three awards at international tourism events during 2015.