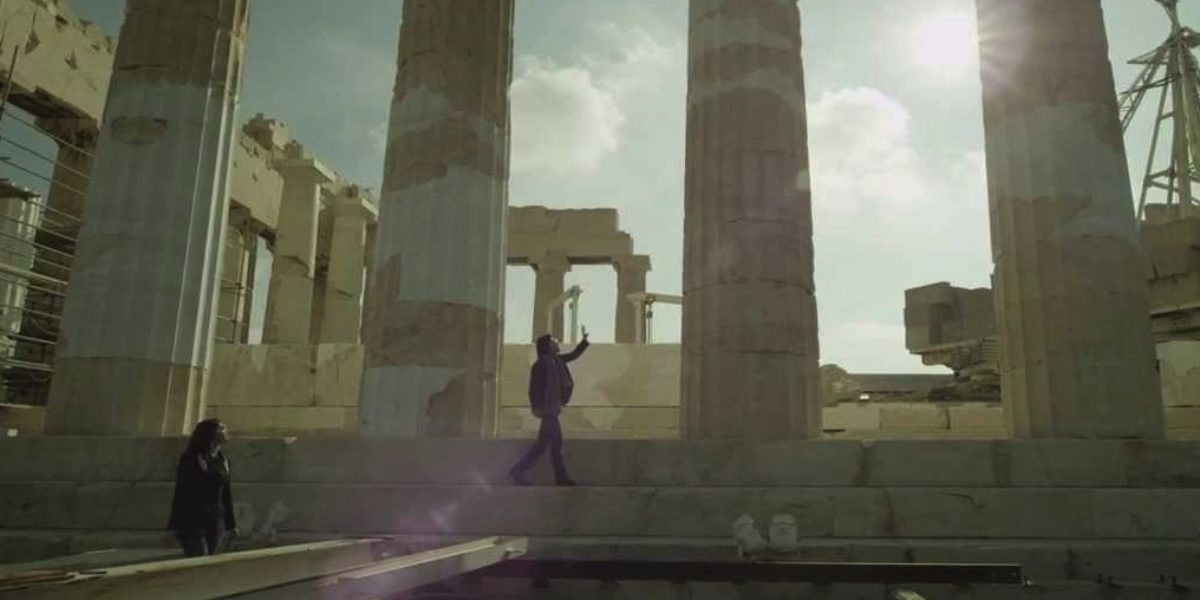 As part of the European Month of Culture in Washington DC, the Hellenic Foundation for Culture in cooperation with Georgetown University Modern Greek Studies and Pillars of Greek Culture invites you to a screening of The First Line, a love story and legal thriller built around the case for the return of the Elgin Marbles.

THE FIRST LINE is a love story about two Greek Attorneys who sue the British Museum for the return of the Parthenon Marbles to Greece. Andreas (Pantelis Kodogiannis) was forced to leave his homeland of Greece as a child but he now returns at the invitation of the Director of the Acropolis Museum (Giancarlo Giannini) to pursue the case against the British Museum. As he gathers evidence to prove that documents were forged to allow for the sale of the Marbles to the British Parliament in 1816, the city of 2011 Athens finds itself in the state of economic and social crisis. Andreas is assisted by his co-worker and love interest Eleni (Kassandra Voyagis) as they go to London to begin the legal proceedings.

A deposition of the British Museum curator (Michael Byrne) turns confrontational as Andreas presses the case against the Museum. The General Council for the British Museum (Paul Freeman) comes to the defense of his client and exploits the over-confidence of the Greek legal team. Evidence about the structural condition of the Parthenon at the time of the taking of the Marbles is also presented by the Acropolis’s Head Archaeologist (Georges Corraface) using the latest 3D technology. The two lawyers and lovers face a long, hard road to reunification that ultimately brings them to an appeal at the International Court of Justice.

The main cast is joined by other supporting roles including Yorgo Voyagis, Spiros Fokas, and other Greek and international talent.

The film was written, produced, and directed by Coerte Voorhees and John Voorhees. This is the Greek-American directors’ first feature film. The idea for ΤHE FIRST LINE was originally inspired by Coerte’s thesis research on the Parthenon Sculptures at Georgetown University. Coerte and John co-wrote the script while Coerte has been pursuing a Masters of Fine Arts in film production at the University of Southern California School of Cinematic Arts and John was finishing his MBA at Stanford.

Coerte and John made ΤHE FIRST LINE because they were interested in exploring the deeper meanings of the Parthenon Sculptures. The Parthenon itself is a cinematic composition that, through sculpture, tells the story of the birth of Athena and her contest to have justice preside over the people of Athens. Having lived in Athens, John and Coerte wanted to relate this ancient myth to modern times and to demonstrate that the Marbles are still important to the people of Greece today.

The story is also about the love between a man and his home country, just as a man may love a woman. The Athenians chose the goddess Athena to represent them, so that they could “fall in love with her” as Pericles famously said. This love and devotion drives at the heart of ΤHE FIRST LINE.

The directors are supporters of reunification because it allows for the more fully completed Parthenon to be seen and appreciated. The legal argument for the return is presented because of the rich history it offers. Central to this argument is the discovery that a name was changed on one of the documents to allow for the sale of the Marbles. It is the directors’ hope that at the very least, more people in the international community will understand the history of the Parthenon Marbles and that their sacred meaning will be retold to a new generation.