Pantelis Thalassinos in Concert in Alexandria 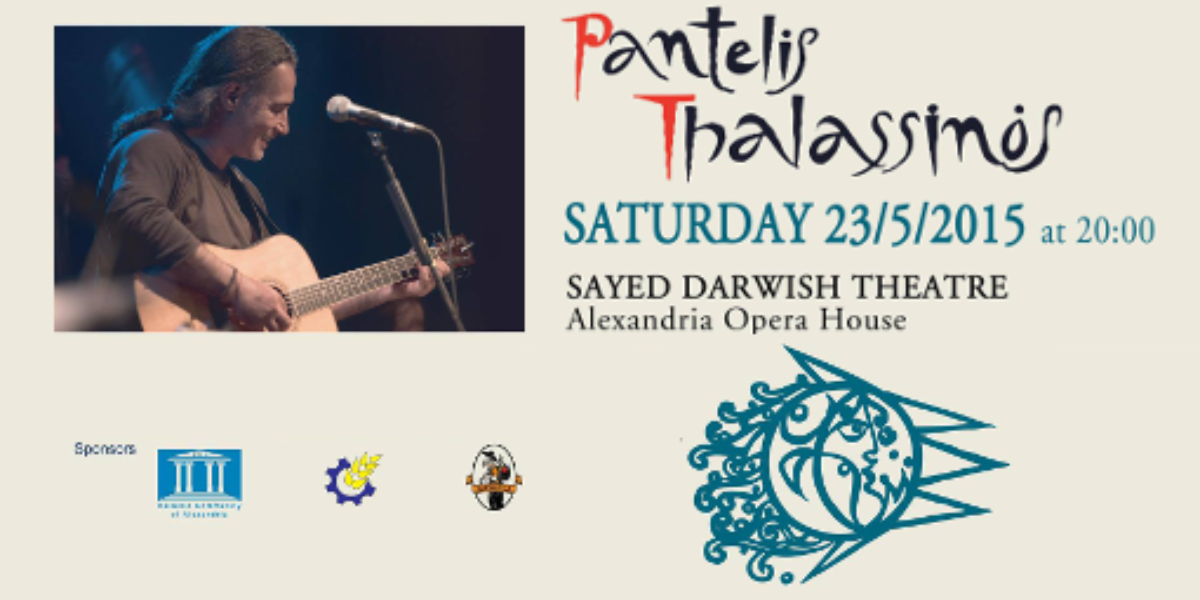 UPDATE: We thank Pantelis Thalassinos, the band, our sponsors, our co-organizers and the great audience for a fabulous evening in Alexandria at the Alexandria Opera House.

HFC-Alexandria, the Hellenic Community of Alexandria and the Consulate General of Greece in Alexandria invite you to a concert with Pantelis Thalassinos at the Sayed Darwish Theatre – Alexandria Opera House on May 23 at 20:00.

Pantelis Thalassinos was born in Piraeus on June 11th 1958. Both his parents were born on Greek islands, his father Michalis came from Chios and his mother Evangelia from Serifos. The family settled in Chios when Pantelis was two years old. There he went to school and started playing the guitar for the first time at the age of seven, together with his brother Giannis. They were taught by the musicians at the local yacht club where his father worked.

In 1996 Pantelis Thalassinos and Giannis Nikolaou formed a band, the duet “LATHREPIVATES”. They wrote and recorded songs like “Apopse leo na min kimithoume” (I think we shouldn’t sleep tonight), “De ftaio ego pou megalono” (It’s not my fault that I grow) and others. They worked together through 4 albums, and then they decided to follow separate paths.

In 1993 Pantelis recorded his first solo album titled “Nihtas kimata” (Night waves) which soon became a huge success, and opened the path for him to follow up with 14 more solo albums. His releases have been awarded with gold and platinum certifications, one of them twice platinum.

Pantelis considers the relation and collaboration with poet Ilias Katsoulis (1939-2008) one of his landmarks in life. Together they accomplished a lot. The covers of his albums were drawn by the reputable artist from Chios, Nikos Yialouris (1928-2003).
Pantelis has released albums as a composer, has been performed by other artists and has appeared in more than 50 albums. He has composed and performed more than 500 songs and has taken part in more than 600 concerts. He has worked with almost every renowned Greek songwriter, composer and singer. He has performed on most places in Greece, as well as in Cyprus, Turkey, Zurich, Geneva, Rome, Odessa, Stockholm, London, Sydney and Melbourne.

As he jokingly puts it: With music, he managed to make real his football dream: to play in the biggest stadiums in the country.