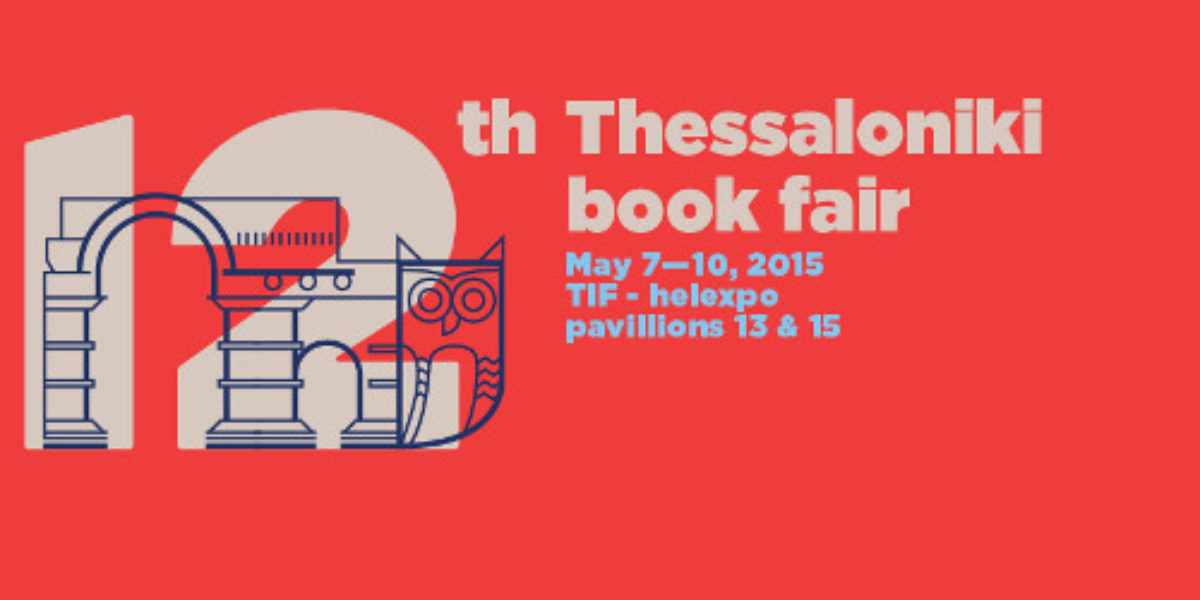 We say goodbye from the 12th International Book Fair. Thank you to all our contributors and to the 50.000 people who came to visit us. See you next year!

Warm interest from the public. HFC.

The Book and The Arts, one f the themes of the fair. HFC.

A visitor in the central HFC stand. HFC.

HFC– Athens and the entire HFC family are pleased to invite you all to the 12th International Thessaloniki Book Fair – TBF 2015.

TBF is an annual event that was established by  EKEVI – National Book Centre of Greece – and that we are proud to carry on after the merging of EKEVI and HFC in 2014. TBF is an international book fair, first held in 2004 and every year since then. TBF hosts publishers from around the world as well as a wide range of cultural events around the city of Thessaloniki and has become a Thessaloniki cultural institution.

TBF, as a dynamic presence at the cultural crossroads of Europe and the Balkans, gathers every year hundreds of publishers, writers, translators, literary agents, journalists, booksellers, librarians, institutions,bodies and organizations for the book from Greece, the Balkans, Western Europe, South-Eastern Mediterranean and beyond.

Despite the extremely difficult socio-economic conditions of the Greek reality of the past years, the Hellenic Foundation for Culture, with the support of the Ministry of Culture and the aforementioned co-organizers, has managed to plan a multi-thematic, rich programme of events, with the following axes:

There is also going to be a sketch exhibition by 69 artists of Latin America and other countries under the title “The faces of Gabo” – a tribute to Gabriel García Márquez (co-organized by LEA festival).

The 2nd New Writers Festival –following the 1st one which was organized in December, 2011, by the National Book Centre– provides a stand for dialogue and promotion of the work of new creators. In the two-day Festival, 8-9 May, new and talented writers, proposed by serious electronic and printed literary magazines, will have an open conversation with their presenters, will introduce themselves to the audience and will present their work to us.

In a time of uncertainty, such as this one, the New voices are coming to enrich, with their dynamism and creative steps, the modern Greek literature.

The Book and the Arts

Books have always conversed and interacted with the other forms of Art, with neither of them ever losing their independence, their dynamics and their way of narration. At the TBF, there are going to be presentations concerning:

The relationship between the Book and Music, with a wide range of sections. With the cooperation of the Greek publishers and the invaluable experience of the School of Music Studies of the Faculty of Fine Arts of the AUTH, there is going to be an exhibition of relevant books, workshops and meetings with the creators. Finally, there are going to be music events accompanying this section.

The relationship between the Book and the Design. There is a longstanding tradition of fine aesthetics in the Greek book sector, concerning the rules of pagination as well as the creation of the book cover. In cooperation with the body of graphics awards, EVGE, there is going to be an exhibition of awarded books and catalogues of the past 13 years, which have been awarded for their design and illustration. There are going to be conversations with awarded creators –illustrators, graphics designers and book editors– which will enhance the creative dialogue between writing, design and the image.

The Book and the Cinema have a longstanding relationship and there have been various discussions and disputes on these subjects. The cooperation with the Short Film Festival in Drama and the Thessaloniki International Film Festival offers a series of projections of known and less known films concerning literary works.

The celebration of 2015, by the Municipality of Thessaloniki, as the year dedicated to the great poet Manolis Anagnostakis, has its own place in the 12th TBF. With the cooperation of the Municipality of Thessaloniki, there are going to be discussions and original narrations, as well as an exhibition of relevant material concerning the work of the poet.

The visitors of the TBF will have the opportunity to meet the acknowledged critic, essayist and poet Zissimos Lorentzatos, through a feature which will cover aspects of his life and its multidimensional work.

This year, the events for children, young adults and educators constitute again a dynamic pole of attraction. The events are organized in cooperation with the publishers of children’s, young adults’ and educational books, in the specially fitted space of the Book Fair.

Within the framework of this year’s Book Fair, there are going to be more than 60 events addressing children and young adults, which include: book presentations, meetings with writers and illustrators, theatrical plays, artistic and music events, etc. Another cycle of events addressing parents and educators includes discussions and workshops. More than 60 writers, illustrators, educators and artists will participate in the events.

The Circle of the Greek Children’s Book will also organize events, inspired by the anthology entitled “Laughter does good to school!” (a common action taken by 88 writers and 88 illustrators who offered their stories and images), which will include creative writing workshops for children and educators.

This year’s Book Fair will also host the House of Fairy Tales-the museum in other words, which will organize cross-cultural educational programmes focusing on the world’s strange civilizations. A trip including myths and fairy tales, features of the history of the world’s civilizations and an artistic representation of their traditions.

New editions and important writers will be present in the 12th TBF as well as fourteen foreign writers invited by the cultural institutes or the Embassies, which are responsible for organization of the national stands of the 19 foreign countries that participate in this year’s Book Fair. The writers are: Marlene Streeruwitz (Germany) , Olivier Delorme and Yves Charles Zarka (France), Ahmet Ozgunes (Turkey), Andrey Kurkov (Ukrania), Olga Slavnikova, Sergei Shargunov and Dmitri Ushkowitz (Russia), Florin Marinescu and Monica Savulescu-Voudouri (Romania), Hrvoje Ivančić and Ivan Sršen (Croatia), Aleksandar Prokopiev and Tomislav Osmanli (FYROM), etc.

At the same time, during the TBF, the 200 publishers participating in it, will organize important events that will focus on a wide range of subjects, from philosophy and politics to history and literature, with speakers who are writers, artists, musicians, academics and people that contribute in many ways in the cultural life of Greece.

Finally, there will be meetings and discussions, in cooperation with the Aristotle University of Thessaloniki and the University of Macedonia, with the central axis being a diachronic and multidimensional subject: Religion, Culture and Politics in the 21st century.

THE MESSAGE OF THE 12th TBF

Focusing on widening the horizons of reading, connecting the book with the modern artistic forms, as well as promoting of new and older national and international creators, the 12th Thessaloniki Book Fair –despite the hard conditions– is present this year too, in our country, with 190 events, offering a stand to almost 400 exhibitors, hosting more than 20 countries and presenting more than 200 Greek and foreign writers.

The 12th TBF invites new and older readers, publishers and writers, academics and professionals of creative economy and all those who wish to explore their reading perspectives to a 4-day celebration regarding the Book, the Arts and Culture. Having as its central axes the dialogue, the co-creation, the interaction and the development of a dynamic community regarding the book which will communicate the vision for a cultural uplifting of our country, the TBF invites us all to meet and discuss with each other.

Detailed Press Releases with information on events will soon follow.