The Art of the Book in the Middle Ages 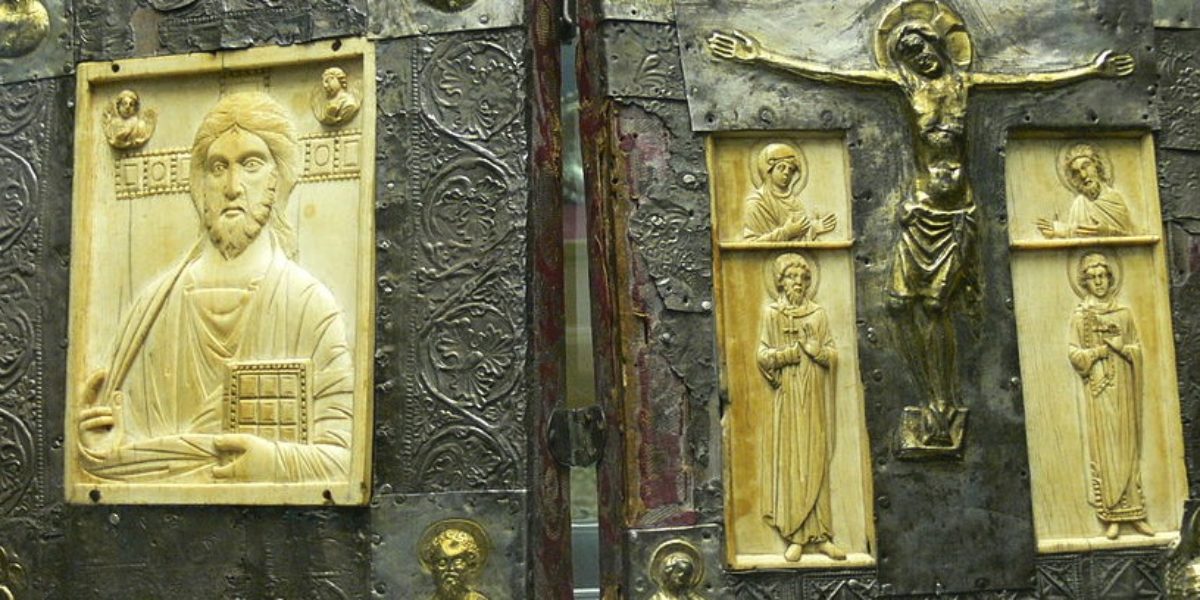 Before the invention of mechanical printing, books were handmade objects, treasured as works of art and as symbols of enduring knowledge. Indeed, in the Middle Ages, the book becomes an attribute of God.

Every stage in the creation of a medieval book required intensive labor, sometimes involving the collaboration of entire workshops. Parchment for the pages had to be made from the dried hides of animals, cut to size and sewn into quires; inks had to be mixed, pens prepared, and the pages ruled for lettering. A scribe copied the text from an established edition, and artists might then embellish it with illustrations, decorated initials, and ornament in the margins. The most lavish medieval books were bound in covers set with enamels, jewels, and ivory carvings.

Many bookmakers in the Middle Ages were monks, and monasteries kept libraries filled not only with sacred texts but also with literary, scientific, and philosophical works by Greek and Roman authors. Multivolume Bibles and huge liturgical books were housed and used in churches. Princes and emperors commissioned gospel books with many-colored illustrations and lettering in gold and silver ink. Among the most ambitious were the large books that monastic communities used daily for singing.

The emergence of universities throughout Europe created demand for single-volume Bibles, books of law, and other texts copied on pages with wide margins for notes and commentary. In the thirteenth and fourteenth centuries, private persons bought and used books of hours, which contained prayers to be recited throughout the day. Important texts were translated from Latin into French and other vernacular languages. The illustrations of some manuscripts, notable for their quality and originality, were executed by first-rate artists; many others, although small, have the monumental elegance of larger works.

Texts were also held in special regard in Byzantium, where people rated literacy as a desirable goal. There are 40,000 preserved Byzantine manuscripts – a great number, considering the expense of their production.

Monastic libraries contained the largest collections; for example, Patmos Monastery possessed 330 books, and Lavra Monastery, located on Mount Athos, held 960 manuscripts. Private libraries generally held more than 25 volumes. During the period between 1204 and 1261, when Constantinople was under Latin rule, book production was limited. Financial troubles meant that it was much harder to afford the materials and labor necessary to produce manuscripts.

The return of Greek rule under Michael VIII spurred a period of renewed growth in manuscript production. Scholars searched for classical writings and then copied and annotated them. Maximos Planudes (ca. 1260–ca. 1310), for example, rediscovered Ptolemy’s Geography, edited Plutarch, and rewrote the Greek anthology of epigrams. Contact with the West introduced a range of Latin texts that Greek scholars translated into Greek – from Ovid and Cicero to Saint Augustine and Thomas Aquinas. Toward the mid-fourteenth century, the financial patronage available to these great scholars began to dwindle. Increasingly, Byzantine intellectuals, such as Cardinal Bessarion (1403–1472), took their expertise and knowledge of ancient texts to Italy.

Department of Medieval Art and The Cloisters, The Metropolitan Museum of Art. Courtesy www.metmuseum.org.