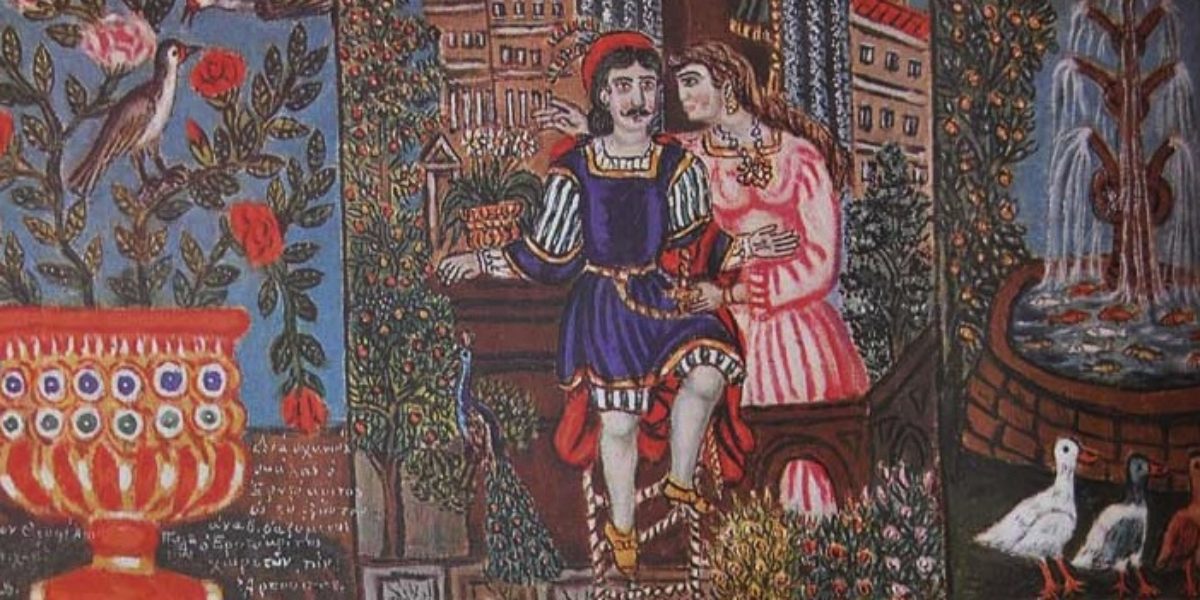 The foundation of a number of academies (The Academy of the Vivi in Rethymnon in 1561, of the Stravaganti in Candia in 1590, and of the Sterili in Chania in c. 1630) based on Italian models was the result of the Cretans’ first-hand experience of the cultural and intellectual life of Italian cities and their desire to recreate something of this life in their homeland. During the last century of Venetian rule in Crete the society of the island attained a confidence and maturity such it had never seen before.

Erotokritos is undoubtedly the masterpiece of this period, and perhaps the supreme achievement of modern Greek literature. It is a verse romance written around 1600 by Vitsentzos Kornaros (1553-1613). In over 10,000 lines of rhyming fifteen-syllable couplets, the poet relates the trials and tribulations suffered by two young lovers, Erotokritos and Aretousa (daughter of Herakles, the King of Athens). Caught in their love for one another, their faith and virtue are subjected to various ordeals until they are eventually united in wedlock. Serenades, gallant deeds, secrets and revelations, jousting, tears, finger-rings, vows of unending love, fatal duels and tournaments all serve to compose the tale of the love-sick hero and his beloved.

It was a tale that enjoyed enormous popularity among its Greek readership and succeeded in making Erotokritos something of a folk hero, whose pedigree was as brother to Digenis Akritas and Alexander the Great.

The plot of the poem was hardly original: Kornaros borrowed it from an Italian prose translation of a standard medieval French romance, Paris et Vienne, by Pierre de la Cypede. However, the Cretan poet, in the true Renaissance fashion, turned the themes of love and war in the prototype entirely to his own purposes, showing himself to be skilled storyteller and a sensitive interpreter of human heart. He arranged the plot into five parts, much like a work for theatre, and subtly balanced his narrative with dialogues so as to create a rhythm that sustains brilliantly the interest of the reader.

With exemplary internal consistency and focus, he assembles the components of his imaginary world – located in the Greek East and centred on Athens, ‘the seat of majesty and the river of learning’ – in unique fashion, while his characters are alive with real feeling and a passionate thirst for life. His portrayals are remarkable for their rich and unaffected exressiveness, their visual power, the extended similes, and rich lyrical treatment of nature by which the subtlest facets of the human souls are explored. Kornaros does not hesitate to draw on the Greek poetic tradition, particularly the vernacular romances, of which Erotokritos comprises not only the natural development but also the supreme example.

Stefanos Kaklamanis, reprinted from Greece: Books and Writers, courtesy of the Hellenic Ministry of Culture.