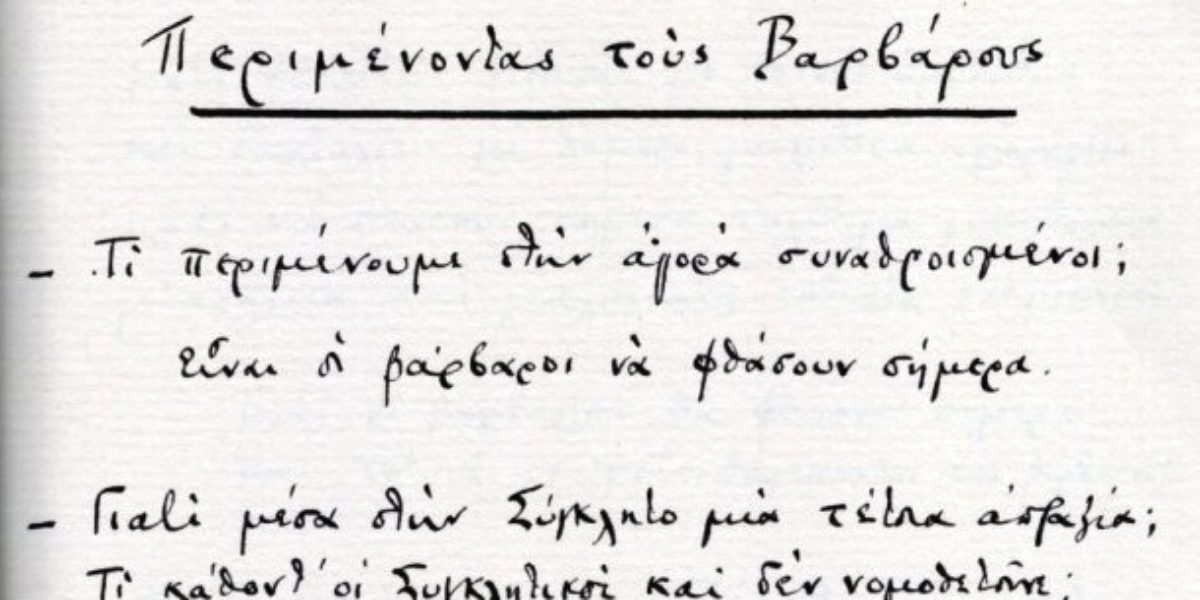 The year 1453 as the end of the medieval period and the start of the Modern Greek period is only a conventional one. The historical periods in the development of the Greek language cannot be clearly defined, because the rate of internal renewal has been very conservative and the transitions between changes have been very smooth. Many elements in the Greek language are still unchanged from Ancient Greek.

The Greek language presents itself as a developmental continuum and the differences from period to period are only visible over very long historical periods. Moreover, there is no temporal or geographical unity for the changes; elements were made obsolete or innovations adopted at different times, speeds, and rates in different areas.

Modern Greek is the result of the evolution of the Koine of the Hellenistic and Roman times and the seemingly Aeolian-Doric elements are only newly inserted analogous formations. There are many dialects in the Greek-speaking areas, which are the result of the passage of time and the cross between the Koine and the local dialects.

Texts and documents make it clear that, in the 15th century, the formation of the current, present-day Greek dialects was already pronounced. However, the written tradition had a strongly unifying effect and fostered the cohesion of the dialects, so that they remained closely linked and did not differentiate enough to form separate languages. Their changes were only conservative local developments.

Those four dialects all have several archaistic features, as well as innovations not found in the Modern Greek Koine. Pontic, for example, in morphology, retains the ancient Greek pronunciation, as in pronouncing the eta (η) as epsilon (ε), it uses ω instead of ου, it does not use synizesis for some words, retains the word-final ‑n (‑ν), uses the Ionian σπ  instead of σφ, many feminine nouns ending in ‑ος, and others. The archaisms retained in the Pontic vocabulary are also many and very impressive.

Tsakonian Greek is now spoken in only 10 villages of Cynuria in the Peloponnese. It is a direct descendant of the ancient Laconian Doric dialect – and not of the Koine – and is the most unintelligible to Koine speakers than any other Greek dialect. Among the archaisms it retains is the Doric long α instead of η, and it is the only dialect retaining traces of the digamma (Ϝ). Among its innovations are the silencing of the sound λ between vowels and the metaplasm of second declension endings of ‑ος and ‑ον to ‑ε.

Greek-speakers in Southern Italy and Sicily are the descendants of the ancient Greek colonists and are slowly disappearing. Griko or Katoitaliotika also sporadically retains the Doric long α instead of η, some vowel clusters without synizesis; it retained and expanded the double consonants, and a restricted use of infinitives. Among its innovations are some phonetic changes obviously brought about under the influence of Italian.

Local varieties with not enough differentiation to warrant being called a dialect are called idioms. In Greece, the idioms of its speakers can be fuzzily separated into two broad geographical categories, the northern and the southern idioms, and another smaller subcategory of the semi-northern ones. As is the case with every language continuum, the dividing lines between the separate idioms are not clear, and each broad category can be divided into many smaller groups with differentiating characteristics. Broadly speaking, the northern idioms differ phonetically by omitting the voiceless ‘i’ and ‘ou’ sounds and by having acquired the capacity for forming unlimited varieties of consonant clusters. The southern idioms, on the other hand, are more conservative in their evolution, both in morphology and vocabulary, by keeping the above-mentioned voiceless vowels and many ancient words.

Modern Greek Koine, usually called the Demotic, is the common language spoken currently in the Greek-speaking areas. It has been formed based mainly on the southern idioms, especially idioms from the Peloponnese.

Phonologically, it differs from Ancient Greek in several ways. The modern language shows a tendency for simplification. Thus, it avoids synaeresis, it simplifies some consonant clusters – either by changing their pronunciation or turning them into a single consonant – it simplifies double consonants, and others. Another phonetic characteristic of the Modern Greek language is the inability of the voiceless plosives to withstand the effect of neigbouring voiced consonants, especially of an ‑ν and change their pronunciation (e.g. τον κόσμο – τον gόσμο, την πατρίδα – την  bατρίδα).

Grammatically, Modern Greek remains an inflectional language, just as Ancient Greek was. However, the trend of simplification continues here as well. Both the dual number and the dative have been abolished; the dative has been substituted with the genitive, accusative, or periphrases, and only remains in fossilised fixed expressions. The declension of the nominals has been regularised and become easier to learn. The verbs have retained all three voices (active, middle, and passive) but only the indicative and imperative moods. The subjunctive remains only to a very limited degree mainly as an auxiliary to the other moods. Of the optative only fossilised expressions remain. The infinitive’s use is not as wide-spread, now used mostly as an auxiliary in certain perfect tenses. Similarly, the participles have lost their inflectional flexibility and most have become nominalised. Of the tenses, only three remain one-word tenses (synthetic inflectional categories), the present, imperfect, and aorist; the other tenses are now formed with analytic (periphrastic) constructions.

Innovations in morphology include the use of diminutives, new suffixes, and new verb endings, such as ‑ώνω instead of ‑όω, ‑νω instead of ‑ω, ‑ζω instead of ‑σσω. Many productive suffixes have been imported from neighbouring foreign languages – Latin, Italian, Turkish, and Slavic – during the late medieval period, which came into the language initially in the form of loan words and were later also applied to Greek words. Modern Greek has also developed the ability for creating compound verbs, not only with prepositions, as was the case in ancient Greek, but with every part of speech and without restrictions in the order.

In the syntax, Modern Greek continues the tendency of the Koine for simplification, by employing the parataxis of many small, main clauses, instead of the subordination of dependent clauses. This evolution had already started in medieval times and was generalised in the current language and its syntactical rules were formed.

The Modern Greek language’s rich vocabulary has retained many ancient Greek words morphologically adapting them to the newly-formed linguistic rules. Many ancient words are being re-employed, which had evolved grammatically or semantically, and therefore have given rise to the phenomenon of etymological and semantic pairs of words with two separate meanings. Many of the ancient “loan” words are words from older phases of the language, mediated by the European languages which tended to use Greek linguistic material to create their special vocabularies. Loan words have also been adopted from foreign languages; almost all of them have been phonetically and grammatically assimilated and are inflected regularly as their Greek counterparts. Only some more recent additions have remained morphologically fixed and unaltered and are indeclinable; they were taken mostly from the French and later the English language and express modern concepts in fashion, sports, cosmetics, technological advancements and the like.

As has already been said, the ancient writers did not follow any spelling conventions; they wrote the words as they pronounced them. The spelling rules were formed by the scholars of Alexandrine times who sought to prescribe the “correct” use of language, i.e. not the one spoken, but the classical language of the 5th century BC. Therefore, their spelling was historical, as the pronunciation of words had already changed in many ways. And this can easily account for the many spelling “mistakes” found in laypeople’s’ texts, since not everyone had or could have the education needed.

Since the 1800s and Modern Greek Enlightenment, several Greek scholars supported the simplification of spelling, as the need arose to simplify the accent marks and breathing marks. Already in 1889, N. Fardys suggested that only one accent sign be kept, the acute accent, and many other scholars (M. Triandaphyllides among them) made similar suggestions for simplification, which, however, came to naught.

The Academy of Athens maintained its opposition for the application of an inflexible system of orthography based on classical spelling, but this led to an impasse, since no Greek could write their own language correctly, if they had not been taught ancient Greek. Thus, in 1933, the Academy did propose some simplifications, which, however, were insufficient.

Manolis Triantaphyllides believed that Greek spelling had to be simplified, for the Greek people to be able to write their own language correctly, and published his book Our Orthography, were he proposed changes, which can be summarized into the following three principles: a. spelling should not be historical; b. it should be easy to learn and not presuppose knowledge of ancient Greek; and c. for psychological reasons of continuity, historical spelling should be retained in the ancient words but simplified in the newer words and the foreign loans. Also, the accent system needs to be simplified.

These approaches to spelling started to be taught in school and gradually the Academy of Athens also orientated itself towards a bolder spelling reform in the 1960s.